Thebe Magugu from SA gest nominated for the LVMH Prize

Thebe Magugu, the Fashionable South African designer has been nominated for the LVMH Prize in Paris. The LVMH Prize is popularly known as a platform shaped by the executive vice president of Louis Vuitton, Delphine Arnault, to support and honour young fashion designers globally.  Out of the 1,700 candidates, South Africa’s very own Thebe Magugu has made it to the top 20 semi-finalists. 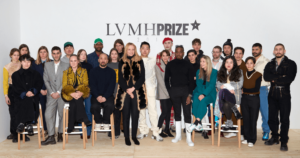 Who is Thebe Magugu?

Thebe is a designer based in Johannesburg and who was born from Kimberly, Northern Cape. He designs ladies’ ready to wear and also has a firm footing in accessories and a small multidisciplinary project.  Magugu took to social media to share his appreciation for being one of the 20 qualifiers to be shortlisted.

“I am honoured to be nominated for the LVMH Prize in Paris. Growing up and looking at the LVMH designers- the corporation that holds Dior, Louis Vuitton, Givenchy, Loewe, and Celine have kept my hunger for what I do because they support and show this idea that fashion even though the business is a madly intelligent, transportive and often dreamlike industry. To be shortlisted for the prestigious LVMH Prize is one of my greatest cherished accomplishments.”

Magugu is one of the two African designers nominated. Kenneth Ize from Nigeria is also nominated for the prize. The 20 semi-finalists will be lessened to final eight by a panel of 63 fashion specialists on 1st and 2nd of March 2019. The eight finalists will then be competing for R4 728 199,28 prize and a year’s worth of mentorship.

Twenty designers that are representing 15 countries got chosen from a field of 1,700 candidates. the executive vice president of Louis Vuitton and the founder of the prize, Delphine Arnault, noted that the engineers of fashion who have made the cut this year have a lot of experience, with some starting out and others being established.