It looks like the Absa Premiership is on another heating level, as Masandawana returned home with a 3-0-win last night against Lidoda Duvha (Black Leopards).  Mamelodi Sundowns tackled Black Leopards in a tricky PSL match last evening. It was one of the most entertaining matches to watch. 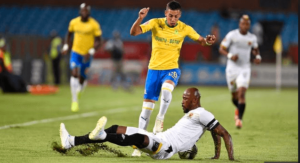 Loftus Versfeld Stadium played host to the match, where both teams were desperate for a win. Both Sundowns and Leopards have tasted defeats in their previous games and their coaches were determined to change their fortunes.

Mamelodi Sundowns is on a two-game losing streak in all of its domestic matches. This is after they suffered defeat in both the Nedbank Cup which was against Chippa United and also a first league loss of the season which was against AmaZulu. However, Sundowns’ win over the Ivory Coast giants instilled much-needed confidence as they manage to win against Leopards, the team that has been excelling of late.

The game had a wild feel to it, with great scoring chances from both teams.  Masandawana came close to going ahead as Laffor had the composure to lob the Black Leopards goalkeeper King Ndlovu. But Jean Munganga managed to rescue with a headed clearance on the line.

Themba Zwane almost handed Sundowns the lead halfway through after going clear on the right side of the box. But his strike had rattled the crossbar as another good chance was wasted. An early substitution was made by Dylan Kerr a minute later as Tshwarelo Bereng got an injury and was replaced by midfielder Robert Ng’ambi.

Lebohang Maboe squandered a glorious chance to break the impasse for the hosts ten minutes before half time. However, he later made up for his miss before half time with an excellent finish from a close range after some great work by Gaston Sirino and Hlompho Kekana in the build-up.

Masia, from leopard, gave Sundowns a 2-0 lead with an own goal after eight minutes from the break. Kerr responded with a second replacement as Ivan Mahangwahaya came on for Mashoene, whereas Mosimane threw on Anele Ngcongca for Laffor a few minutes later. With five minutes left for the game, Ricardo Nascimento scored another goal from the penalty spot after Benjie Zulu’s handball inside the area.