Orlando Pirates team feels like they should have won the match against Esperance de Tunis on Saturday night. The leading team on Pirates side were not able to take over the match against the Tunisian football heavyweights to the sword in the CAF Champions’ League Group B game. The match took place in Soweto. 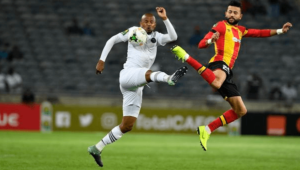 It was clear that Esperance travelled to South Africa to secure the 3 points. The team defence was too deep and allowed Orlando Pirates to make a number of chances which they were unsuccessful.

The Incapability to Convert Chances to Wins

The Bucks (ezimnyama Ngenkani) missed a number of chances on Saturday and also, they were unlucky in front of goals as Justin Shonga‘s authentic goal was rejected for offside. However, on the replays after, it showed that Shonga was on-side.

Thembinkosi Lorch was brought down inside the box and the pirates came with strong penalty appeal that was ignored by the referee even though it was a clear studs-up test on the pirate’s attacker. Innocent Maela, Augustine Mulenga and Alfred Ndengane also missed scoring chances. Having said that, Orlando Pirates must learn to create their own luck by making sufficient and quality chances to ensure that they win matches particularly against strong teams such as Esperance.

The Buccaneers are known to have the best defenses in this season’s Champions’ League group phase. This has pushed the team to the top of Group B positions, and against Esperance, the Pirates’ defense faced the biggest challenge.

Esperance has a top-quality strike force that consists of last season’s Champions League top goal scorer, Algerian winger Youcef Belaili, Anice Badri and lethal center forward Taha Yassine Khenissi. Nevertheless, Pirates’ defense was rock-hard and organized at most of the time and gave little away as it did against the Guinean champions Horoya AC on day two match that also took place in Soweto.