Home » Woods and Mickelson sponsor golf side-bets at ‘The Match’

Woods and Mickelson sponsor golf side-bets at ‘The Match’

In one of the greatest matches between two giant golfing rivals, Tiger Woods and Phil Mickelson go head-to-head in Las Vegas. On Friday, 30 November 2018, judgment will be divided over the qualities of a match that will see the winner taking US$9 million. Woods, 42, and Mickelson, 48, were once aggressive rivals, frequently competing for the sport’s leading prizes. Woods spent about 683 weeks as the world’s number one in golf while Mickelson never achieved the top spot. 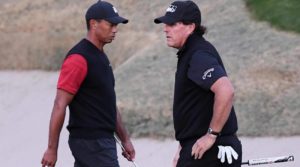 However, since their prime in the 1990s and early 2000s, both Mickelson and Woods are in a stable decline. While they recorded successes on the PGA Tour in 2018, it has been five years since Mickelson won big, while Woods also hasn’t lifted a major trophy since 2008.

Even with their well-known rivalry, it seems that they have each grown and become better as they even practice rounds together. All of which meant that efforts to build-up Friday’s game at the exclusive Shadow Creek Golf Course as a head-to-head bitter rivalry match have gone dull. And it has certainly struggled to gain ample traction between the top lights of the tour.

Mickelson has fired the opening salvo on Wednesday and wagered $100 000 that he makes it at the first hole, a wager which Woods then called him to double.

Mickelson and Woods will both be wearing microphones throughout the game and so will their caddies. There is confidence that the event will attract enthusiasts of the sport while being quick to disprove claims the pay-per-view event was all about cash.

Each hole is a tournament and the player earns a point if he beats his rival on the hole. The victor is the player with the most points at the end of the game, which could be on the 10th hole if a golfer wins the first nine holes.

The Tiger Woods vs Phil Mickelson match is one not to miss. It’s a break or make match. Will you be following the match?